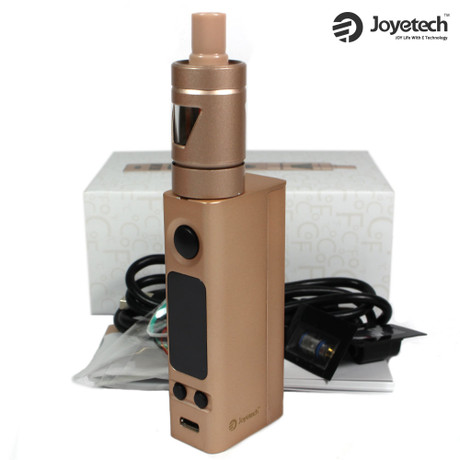 The Joyetech eVic-VTC Mini with Tron tank is a new and upgraded version of the VTC with a newly designed tank. The new VTC Mini can fire up to 75W compared to the 60W limit on the older version of the eVic-VTC MIni. With a newer display showing more features, the eVic-VTC Mini with Tron comes with a version 2.0 display, showing the current vape mode (titanium, nickel, stainless steel, power, or bypass), wattage or temperature, resistance and current, output power in watts or voltage, the vapor time and puff count, and the remaining battery life. The new firmware on the Tron VTC-Mini allows stainless steel coils to be compatible with temperature control on the updated VTC Mini.

The eVic-VTC Mini features temperature control that can reach up to 600° and 315°C. It has output wattage of 75W and available in four different modes depending the type of coils being used. The VTC can accept atomizers with resistances of 0.05 to 1.0ohm in temperature mode and 0.1 to 3.5ohm in variable wattage or bypass mode. Temperature mode allows more control of vapor production to allow consistency with better battery life. The VTC-Mini takes one 18650 battery and it includes a micro USB cable for fast and easy charging.

Instead of the eGo ONE Mega tank that came with the first version of the Joye eVic-VTC Mini, the new kit comes with the Tron tank. The Tron is designed with a futuristic look opening up a V shaped window allowing users to view the e-juice easier, which has an e-liquid capacity of 4ml. The Tron uses the same coils as the eGo One Mega for great vapor production. The airflow control on the Tron is hidden to bring more unique appearance to the tank. Also included are some different colored silicon rings to allow users to change up the tank with a slight different appearance.