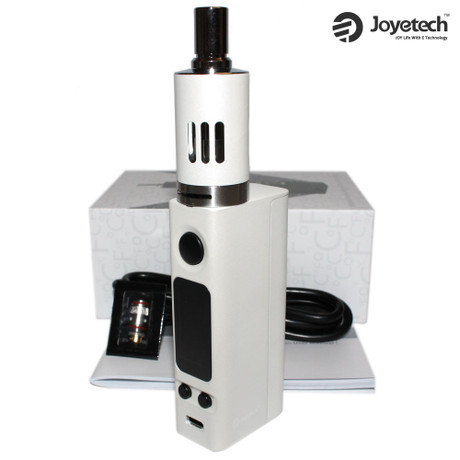 The Joyetech eVic-VTC Mini is a new innovative temperature control device featuring the characteristics and performance from the bigger version of the Joye eVic -VT. The VTC Mini is more compacted and portable compared its previous version, this time using an external battery instead of built-in internal battery, which allows users to interchange the battery. It takes an 18650 battery (sold separately) and uses micro USB charging for quick and easy charging.

The eVic-VTC Mini features variable temperature and wattage settings allowing the device to produce a maximum output of 60 watts, with temperatures as high as 600F and 315C. Adjusting the device can be easily done by pressing the button on the bottom of the mod. Temperature control allows rich flavor while decreasing e-juice consumption with battery consumption. The device allows wattage to reach maximum output at a faster rate. The variable temperature works with Kanthal, Nickel, and Titanium wire. The eVic-VTC Mini mod also features a beautiful smooth and OLED screen just like the eVic-VT displaying the current temperature or wattage, the atomizer resistance, resistance of atomizer, and the battery life. It can be just customize to display the time or puff count instead of the battery.

The kit includes an eGo ONE Mega atomizer tank that can store up to 4ml of e-liquid. The tank has different options of coils that can be used such as the Titanium coil, Nickel coil (Ni200), and regular Kanthal coil. With dual air holes, the tank provides massive vapor and the airflow can be adjustable depending on preference.